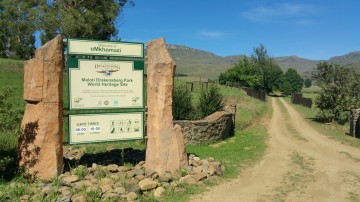 The uMkhomazi section of the Maloti Drakensberg Park is one of the most isolated and least explored mountainous areas in KwaZulu- Natal.  The area is not attached to the main escarpment and comprises of a number of elevated ridges protruding towards the Midlands. uMkhomazi is characterized by numerous high altitude wetlands, deep gorges and rolling prairie-like grasslands. It is home to a variety of mammal and bird species. Black Wildebeest, Mountain Reedbuck, Grey Rhybuck and Eland are the more commonly seen mammals but Caracal, Serval, Porcupine and Otter are also found in the Area.

Some of the more common bird species include Bokmakierie, Golden Breasted Bunting and Stone Chat and if you are lucky you may see Lammergeier, Cape Vulture or Black Eagle. uMkhomazi is one of the few areas in the Berg where one can hike for days without seeing another soul. The ideal destination for a wild demanding hike!