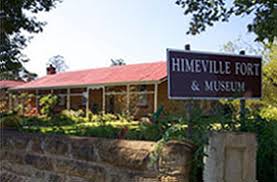 Originally built as a fortified laager, the “Old Fort” in Himeville (the last of its type to be constructed in South Africa) was completed in 1900. In 1902 it was taken over by the Natal Mounted Police and was used as a prison until its closure in 1972. Subsequently, through the efforts of local residents and the local Historical Society, who took over the buildings in 1976, it became a museum, which was opened to the public in 1981. Said to be one of the best rural museums in South Africa, the museum comprises a large complex (warders’ house, cells, the armoury (originally the only building within the laager walls), workshops and parade ground, and a few additional buildings erected to house some of the exhibits).

The warders’ house, furnished much in the style of 1900, comprises a typical living/dining room, kitchen, bedroom and nursery. Wildlife exhibits; local pioneering records and photographs; typical examples of a Post Office/telephone exchange and a schoolroom; rock art and other items associated with the Bushmen of the area; and bead work and other artefacts of the local AmaBhaca community are on display in some of the old cells. A variety of exhibits is housed in the old armoury, while a modern addition houses a number of farming and dairy implements, and a display of relics from the Boer and the two World Wars. Around the parade ground are displayed several agricultural implements; carts and wagons; a blacksmith’s forge and workshop.

The museum, located on the main road through Himeville, is open every day (except Monday) from 09h00-12h30. Admission is free, but any donations (which will go towards maintaining the standard of the museum) are greatly appreciated. Talks can be arranged for groups and schools through the Curator. Contact Tel no: 033 - 7021184