I often say that the most beautiful part of the Drakensberg is the part you are in at the time of answering the question. The logic is simple – anything else is just a photo. Sadly no photo will ever do any justice to a mountain.

The Didima region of the Northern KZN Drakensberg has always been a special area to me. When I recently prepared a list of the top Drakensberg passes, four out of seven were at Didima. So when the forecast included 40cm of snow on Mafadi, and only 12cm on Cathedral Peak – it was an easy choice of where to move the hike.

It was Ross’ first time hiking to the top of the Drakensberg, so there were lots of unknowns. His recent running form had been very good, but road running and hiking are completely different sports with different challenges.

So we set off from Didima Office up Tryme Hill (as in “try me” hill). It is a reasonably steep hill, which means it is over fairly quickly. Unlike most approaches, there is no easy start – you are climbing as soon as you are out of the parking lot.

We made good time up the hill, and were greeted by the sight of 8 eland – 4 of which were babies. 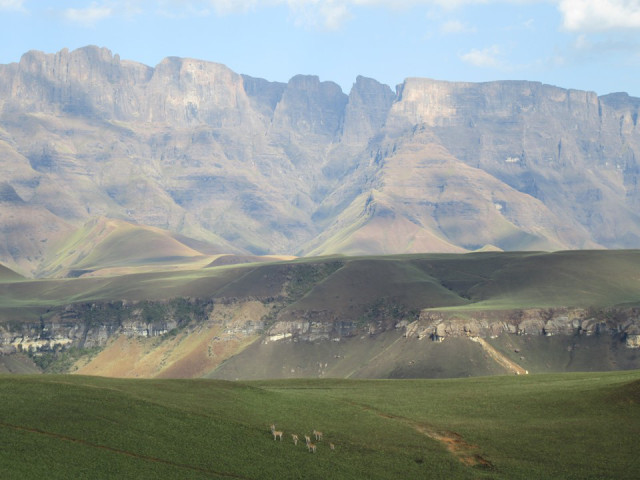 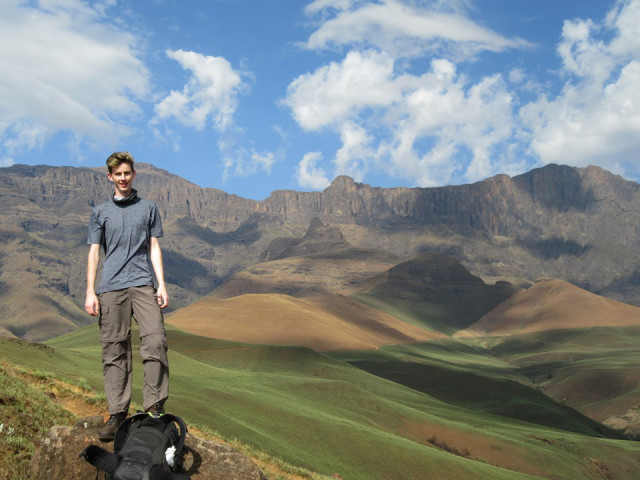 Camel Pass is notorious for exposure. But in dry conditions, there is nothing particularly serious about it. I had included this pass on my list of the best passes in the Drakensberg, and I can absolutely stand by this opinion having done it a second time. 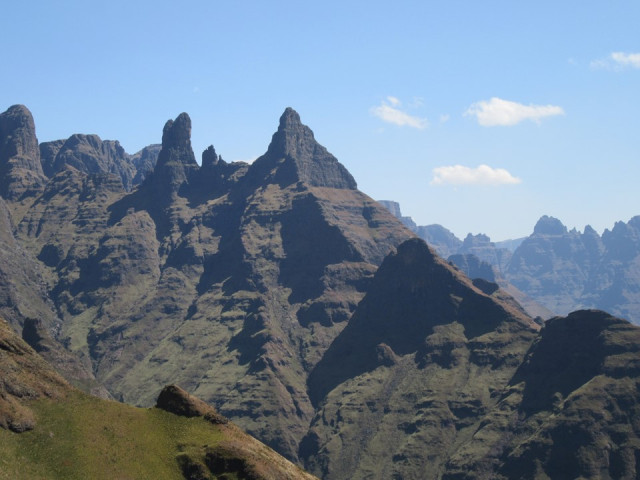 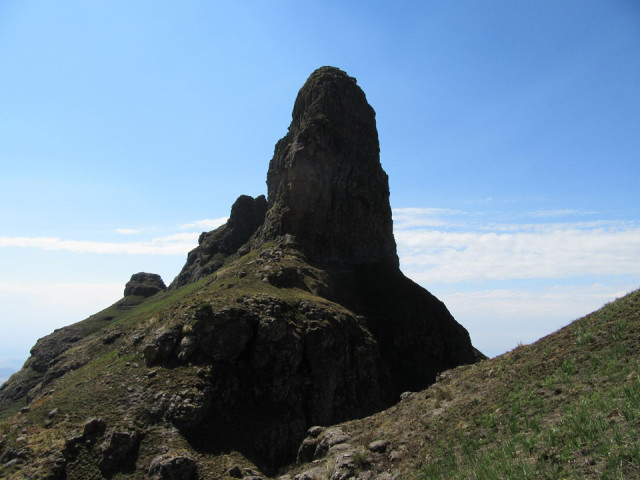 We saw a bergadder along the way up the pass. I don’t know why – but I have been seeing far less snakes in the mountains recently. This seems unfortunate to me – these creatures are such an important part of the ecosystem. They are almost always harmless, unless provoked. 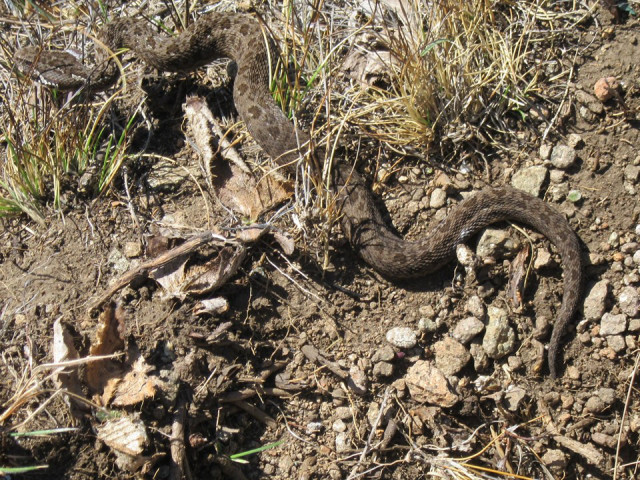 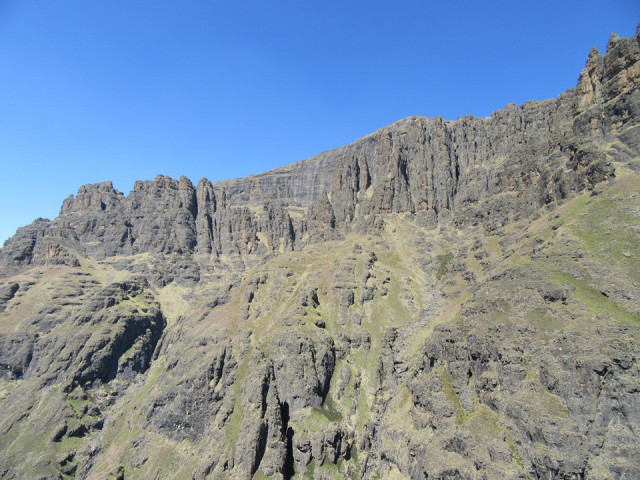 We saw two Basotho ladies just below Windy Gap, but otherwise we had the pass to ourselves. 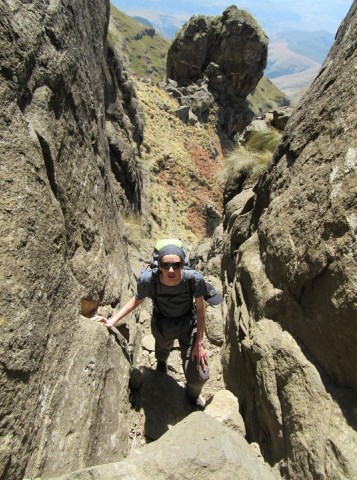 We got to the escarpment fairly early in the day. I wasn’t sure how Ross would do, so we had the option of either staying in one of the many caves around Ndumeni Dome, or pushing on for Twins Cave. He was keen to push on, so after some lunch behind Castle Buttress, we began the slog up Cleft Peak. 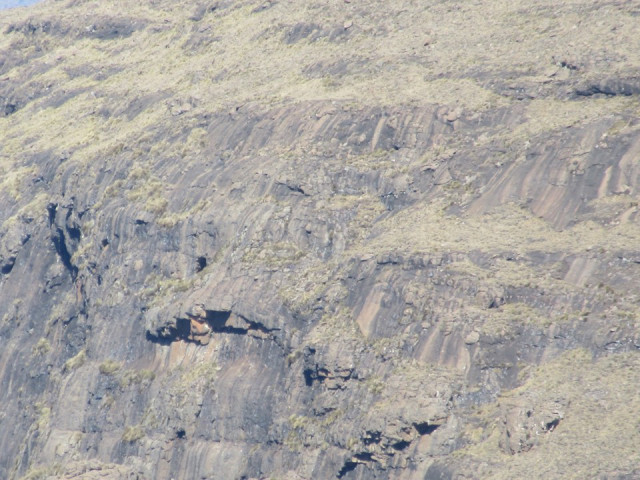 Rolands Cave as seen from the slopes of Cleft Peak 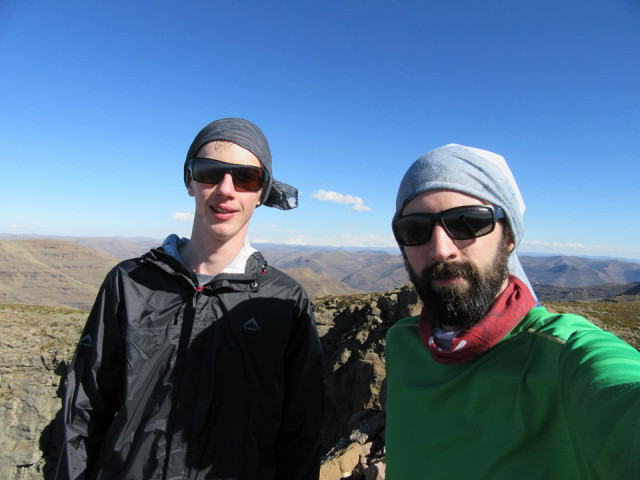 On the way off Cleft Peak, we bumped into some familiar faces (well, familiar to me anyway). It is always great to see friendly faces on top of a mountain! 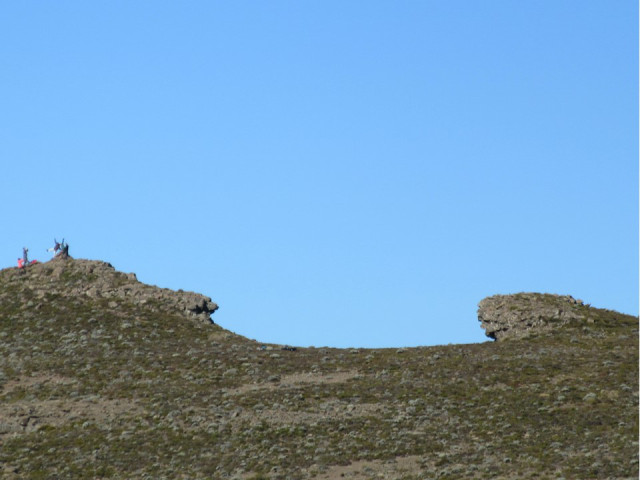 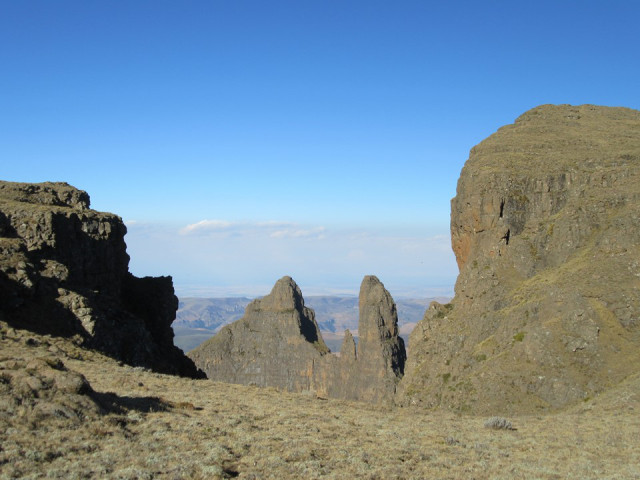 We opted to use Elephant Gully. I rate that area between Elephant, Mahout and Cockade as the most scenic part of the Drakensberg. I have walked through it many times, and every time I am struck by how spectacular it is. Unfortunately it was late in the day, so I only have one average photo of the gully. We had planned to hit Easter Cave, but seeing as I had accidentally deleted all my GPS waypoints that morning (second time I’ve done that in 5 months), we opted for Twins Cave – which is easier to find in the dark.

We reached the cave at 7PM, only to find that we would be sharing the cave with some more friendly faces! As it turns out, Ian, Riaan, Sanet and Nico were also sleeping in the cave. Luckily there is plenty of space.

That night was very cold – one of the coldest nights I’ve ever had in the mountains. The ambient temperature was below zero, as evidenced by my frozen water bottle – but the kicker was the wind that howled through the cave all night. 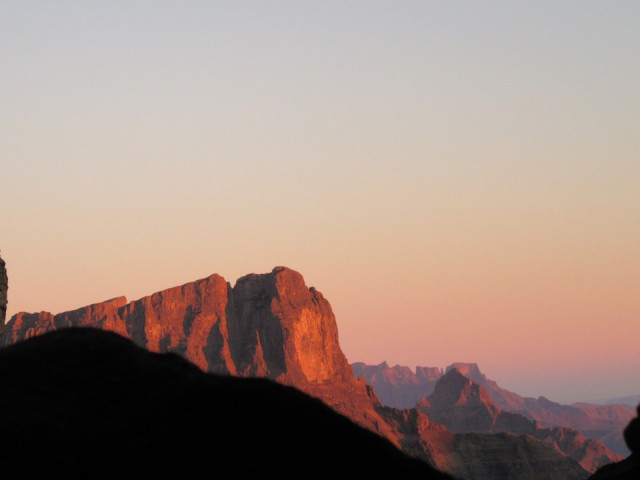 I got a few sunrise shots (without getting out of my sleeping bag, naturally). 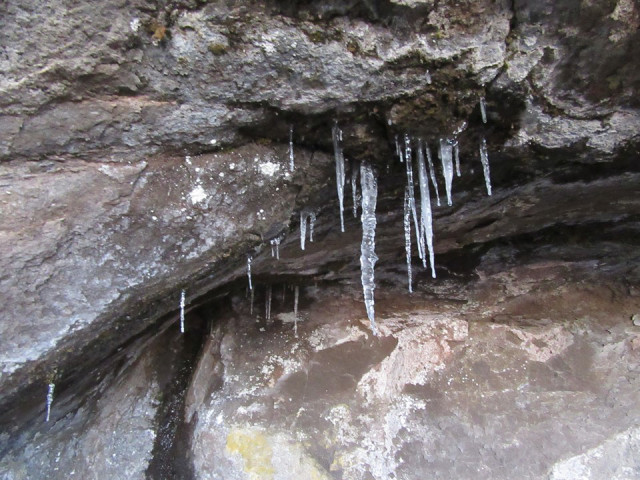 Some icicles had formed overnight. I proceeded to convert these into a cup of coffee! We set off from Twins Cave around 8:30, into a rather strong wind. 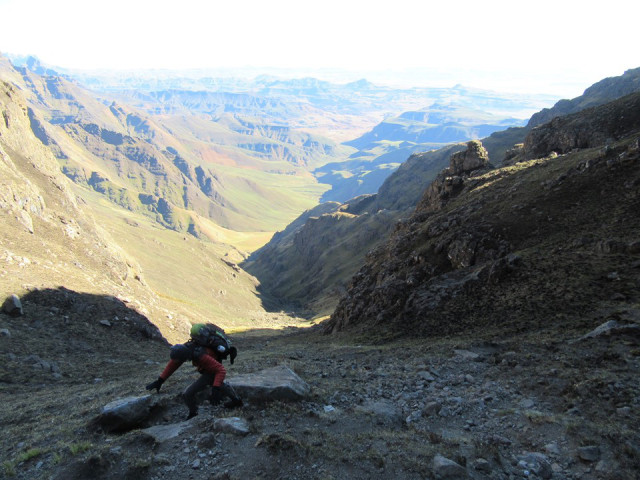 We crossed over the saddle to be greeted with a large amount of snow just south of us. We had placed our route so perfectly that we just missed being in the snow, but were close enough to get some amazing views. 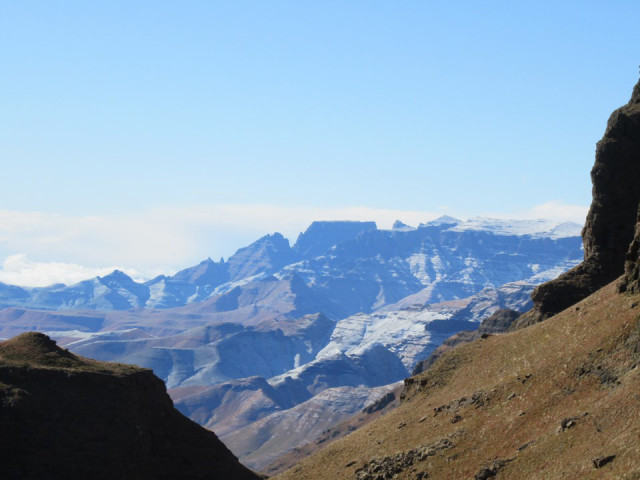 It was nice to finally do Mlambonja Pass in clear weather. I had done it twice before, once in mist and once at night. 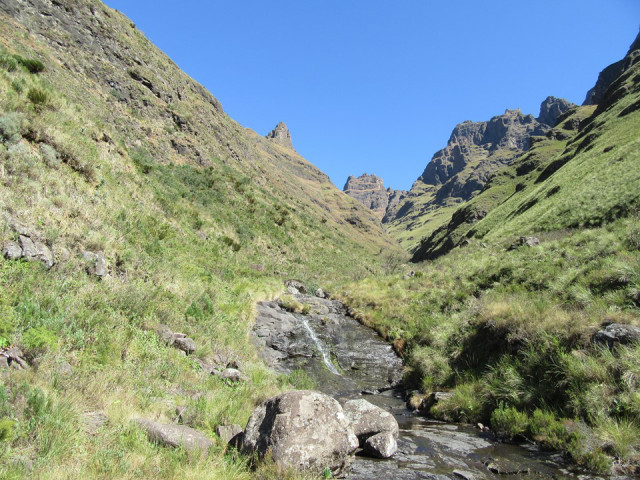 There was a lot of snow around the Organ Pipes. Chris and his team slept in Rolands Cave that night, and had to wait till midday before being able to safely leave the cave. 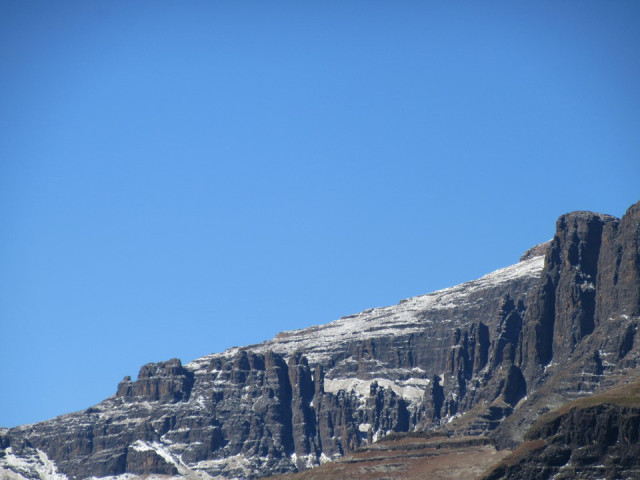 We decided to take the scenic route to walk out – following the contour path to where it starts on the ridge below Orange Peel Gap. I had never done the section between the start of the contour path and One Tree Hill – it could very easily be the most scenic section of the entire contour path. 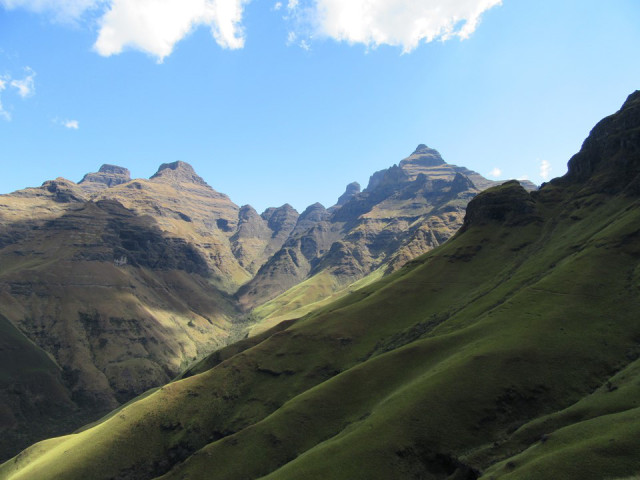 After walking out the final road section, we reached the car around 3:30PM. Our final distance was approximately 45km, with roughly 2.6km in altitude gain and loss in a time of roughly 32 hours. Overall one of the most scenic hikes I have ever done.